"Getting ready for the trip to Death Valley and Baja California is going slowly. The fact that it is going at all is a major advance over my usual Throw everything in a bag at the last moment technique!"

I wrote the above a week ago. As you can see I'm not much further along in the packing process. I need someone to tell me, "Take this, not that" Too many options leads to decision paralysis! 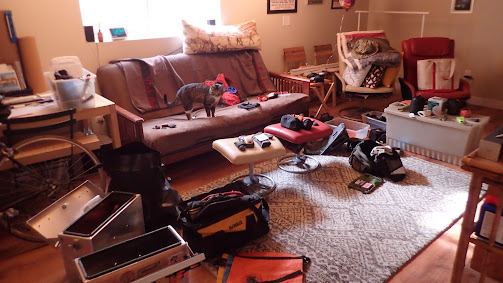 Frankly, I was hoping the cat would be more help!

Make my day, subscribe and tell a friend about this blog!
Posted by J. Braun at 10:27 AM 1 comment:

2021 ended with a crashing thud. Endless days of a non-covid flu with relentless complications that are just now getting better.
Plans for 2022 include trips to Death Valley and Baja for the races. The either the Utah or Idaho BDR with a friend. Lastly a cross-country trip to catch up with friends.
Stay tuned! The future's so bright I have to wear sunglasses!
Make my day, tell a friend about this blog!
Posted by J. Braun at 12:47 PM No comments: 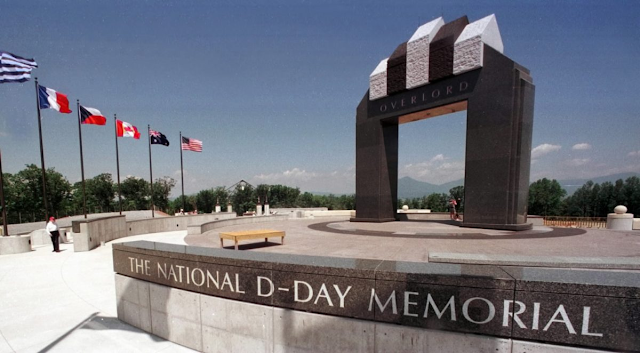 This is a note from my friend Bob who is on a month long trip along the east coast:

This is a story of unforeseen circumstances, of serendipity. I ended up in Bedford VA last night. As chance would have it, the National D-Day memorial is located in Bedford, a small town in the Blue Ridge mountains of VA. I spent the morning at the memorial park. It was a powerful experience

Why Bedford? It’s because of The Bedford Boys. The town of 4,000 sent 35 young men off to war with a parade and much fanfare in early 1941. 23 never returned. They were part of the initial assault wave to hit Omaha beach. 19 were killed in the first 10 minutes. 4 more in the ensuing inland invasion. Bedford had the highest proportional losses of any town in the country. Hence the decision to built the memorial in this small town. The story of the Bedford Boys is tragic. There are forces active in our country today that seek to erase and rewrite history, destroying memorials as they go. They are misguided, evil or both. I hope they don’t come for the D-Day memorial. There have been regimes in the modern era that have, to varying degrees of success, took action to erase and rewrite history, destroying buildings and artifacts of their history along the way. The Russian Communists, the Chinese Communists, the Khmer Rouge, are examples.

Our country’s history has been both glorious and uplifting as well as sad and tragic. But it is our history. Our history. It can not be undone. It should not be erased and rewritten. What happened to the Indians was tragic. Slavery was very bad. It when against our founding and fundamental principles of Liberty and Justice for all. “All men are created equal”. The southern “Lost Cause” movement was a specious narrative. There is no moral justification for slavery. But we need not allow our history to be erased and rewritten, and our memorials destroyed. If the south wants to honor the brave men that fought for what they wrongly thought was a righteous cause, we should let them. Unfortunately, the misguided and evil forces of active today have had some success. And governments of all levels have kowtowed to them in many cases. It’s sad. Our history happened. It can not be undone. We should remember the good, the bad, and the ugly.

Make my day, tell a friend about this blog!
Posted by J. Braun at 10:01 AM No comments:

A farmer and his wife are driving along in their pickup when she says,
You never tell me you love me.
He replied,
I told you I loved you when we got married. If I'd a changed my mine, I would have let you know.
Make my day, tell a friend about this blog!
Posted by J. Braun at 9:41 PM No comments:

A farmer and his wife are driving along in their pickup when she says,
Remember when we used to drive all scrunched up close, side by side?
He replied,
I ain't moved.
Make my day, tell a friend about this blog!
Posted by J. Braun at 10:10 PM No comments:

A few months back a woman in a Mercedes was riding on my back bumper maybe 2' away. I kept slowing down but she didn't get the message. Finally as she roared around me I pointed the way to heaven with my middle finger.
At the very next light we were sitting next to each other. She rolled down her window and yelled, "You didn't have to be so rude about it!"
I replied, "Since you were driving like you were from Boston, I wanted to let you know that I'm from Boston too!"
Who knew a Mercedes could do a burn-out?
Make my day, tell a friend about this blog!
Posted by J. Braun at 11:09 AM No comments:

Once a month I take the neighborhood kids to the town swimming pool. It gives them a break from their parents and their parents a break from the kids. It's fun for me and we have pizza afterwards to celebrate that nobody drowned.
Yesterday I took 7 kids (aged 4 - 11 years) for the usual fun and games. This time it was a little different. The kids had to stand next to a line on the wall and the ones that weren't tall enough got a white wrist band to signify that they were limited to the Kiddie Pool.
Then the woman turned to me and wanted to put a blue band on my wrist. 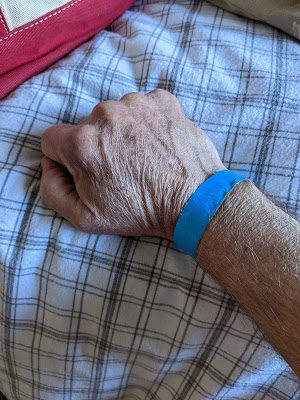 "What is this for?" I asked.
"This shows that you are a responsible adult."
What? Wait! Me? A Responsible Adult!?!?!? - Never in my life has it ever been suggested that I was either Adult or Responsible. This was a whole new chapter in my life. There must be some major shift in the cosmos for this to take place.
Despite this life changing event we all had fun and nobody drowned. The double pepperoni pizza went first followed by the Hawaiian pineapple/ham. Stomach aches are not counted as a casualty.
Make my day, tell a friend about this blog!
Posted by J. Braun at 10:44 AM No comments:

J. Braun
Tooele, UT, United States
This started as a way to get through the winter months in Boston when motorcycle riding was impossible. A group of us used to gather at Paul's house every Monday to make a group dinner and watch a motorcycle movie. Fun Times!